Before you arrive at the high altitude venue, be sure to consume a lot of water. You lose a considerably higher amount of water at elevation.

As far as food goes, you will be burning more calories due to the extra exertion. We wouldn’t force feed ourselves in anticipation of needing to eat more. Keep it simple and eat until you are full! If you already have a pre-race meal that works for you at lower elevation, we would stick with that same meal at elevation. It would be a risk to change something that already works.

We reached out to Karl Nygren, to get his thoughts on altitude racing. Here was his response:

“I do not have any specific advise on diet besides making sure to stay hydrated. It is very easy to become dehydrated at altitude so you need to drink more then you are used to. If possible it is best to get to altitude early. The earlier the better but I have found I like about  a week. If that is not possible arriving at altitude right before the race is best. There is a window of a couple of days after getting to altitude that the body usually feels tired because it has been working to adapt to the altitude. This can be avoided by getting there early and adjusting or racing right when you get there. The most important thing to understand while racing, is you simply can not go as fast as at altitude because there is less O2. You need to start conservative and build into it. It is very easy to go under and hit the wall early if you start too fast.” – Karl

There are some people who ascribe to changes in diet for altitude racing. But if you are feeling good in the weeks leading up to a race we wouldn’t change a thing other than increasing water consumption. 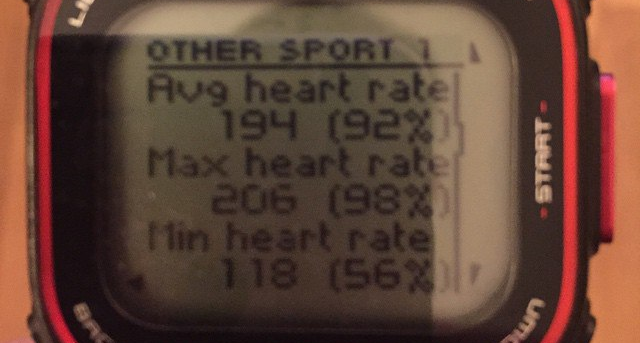 Is it necessary to control the heartbeat rate during training?

— Before I joined our regional team, I was training with my personal coach and we didn’t pay too much attention to the heartbeat rate, but we were still measuring it occasionally. When I finally joined the regional team, they gave us personal heart rate monitors and we were training, strictly controlling our heartbeat rate. We were severely criticized for any violation of heartbeat zones… Today main principles are pretty same, i.e. we pass an examination, which allow us to identify heartbeat zones, which we have to observe during training sessions in future. So, I think that it’s necessary to observe your heartbeat rate and use it as a reference point.

What is your opinion about training at high altitude?

— Each person has one great altitude value, which allows him or her to show amazing results and feel the pump after reaching it, but there is also altitude, which simply kills all your feelings when you reach it and you literally feel nothing. To tell the truth, I like to run after high altitude training camps and competitions, and all my best results were shown exactly after such high altitude mountain training camps. For example, before I won four out of four races during the World Junior Championship in Turkey, we were training in Bulgarian Belmeken. I was feeling great, even though Turkey had a pretty high altitude too. Another example, before winning the sprint race for the first time during the World Cup in the city of Nove Mesto, we were training at “Khmelevsky Lakes”, which is a mountain range located next to the “Laura” mountain ski complex in Sochi. It also has high altitude, which gives me great pump effect. I was also going down to Sochi from there and I felt great difference, even though the altitude change was somewhere around one hundred meters.

Which length of skis and poles do you use for classic races? Are these values different for long distance runs or sprints (or the same)?

— If we take just a classic ski race, without taking city sprint into account, poles have to be 157,5 cm in length and skis – 207 cm. And if we consider such things as sprints in Drammen or Stockholm, I can say that I use a little bit longer poles. This year during the Stockholm sprint race, Nikita Kryukov discovered that I was going to use longer poles, thus he asked me to give him my old ones, which were slightly longer than his own. I gave him my poles; he used them in race and even won that competition.

What is your normal heartbeat rate at standstill state (in the morning) and in the peak condition (before competitions)?

— I can’t measure my heartbeat rate every morning, but usually it’s around 38-40 beats per minute. Sometimes, my heart rate monitor is showing 42-43 beats per minute right before I start my training.

What is your average and maximum heartbeat rate during 10-15 km races?

Do you train on the bile during the off-season?

— I was using it last year, but this year my knee started to disturb me during such workouts, thus I switched to cross running.

One more question, what do you eat right before races start?

— We eat a lot of macaroni and pasta. We were eating it all summer and autumn. Probably, I will remember that forever. We were eating, eating and eating… Of course, there were different products, but the main part of our diet was taken with pasta (he’s smiling). If we are talking about special sport drinks, then I can say that during multiday races we use special carbloaders. We have no restrictions in our nutrition program. Isabel and Reto explained us that it’s much better to eat properly during our breakfast, lunch and dinner than come back to our rooms and eat something sweet or go to a café in the evening to have a cup of coffee with donuts. We have to be full before starting our training.

Isabel prepares a special drink for us during races. I can’t tell its name for sure, but I think it’s Vitargo Electrolyte. I was always telling her that I didn’t want to drink it, because it was making my mouth extremely dry, but she was telling that it was a normal reaction. During long distance races you have to drink a lot in order to avoid “drying” of your body and maintain maximum performance. And in 10 kilometers before the finish line we drink Coca-Cola. Many athletes are drinking Coca-Cola with activators during marathon races.

What do you mean “with activators”?

— Those are special substances, which we add to our drinks, e.g. guarana.

Sergey, what do you think is the secret of an overwhelming superiority of Norwegian skiers these days?

— Skiing is in their blood.

Basically what is happening when you ski at altitude, you are primarily working your slow twitch muscle fibers. Because of the lack of oxygen you tend to hit your max sooner then you would at sea level. Hitting your max sooner means you are doing that at a slower ski pace. Your body (muscles) are learning to work at that slow pace even though you are going all out. Since you can’t move as fast your fast twitch muscle fibers hardly get any stimulation or work at all.

This means that when you go down to sea level, your body is used to that max rate pace at altitude. Where you only recruit slow twitch muscle fibers to achieve a movement, because that is what you have trained to do.

If you have the ability to come down and do some hard intervals down at a lower altitude to get those fast twitch muscles activated, that would do a lot to your overall pace. 8-15 Intervals of 30 seconds – 2 minutes with equal to double rest time. You’ll see your body start to learn how to move fast.

You can also add in short sprints of 10-20 seconds during or at the end of your training. 6 -12 of them. full recovery of 2+ minutes. Any way to get those fast twitch fibers activated and ready to be used. Q: Any suggestions, advice, or changes to keep in mind when training at 10,000 feet elevation?

A: Training at that elevation is very tricky. You’re correct in your assessment of speed and tempo efforts at elevation. With the lack of oxygen it is difficult to reach the same high tempo you may have been able to ski at sea level. We see that a lot with athletes coming from higher elevations. They are some of the most fit athletes, but lack the snap and speed to keep up at lower elevations. 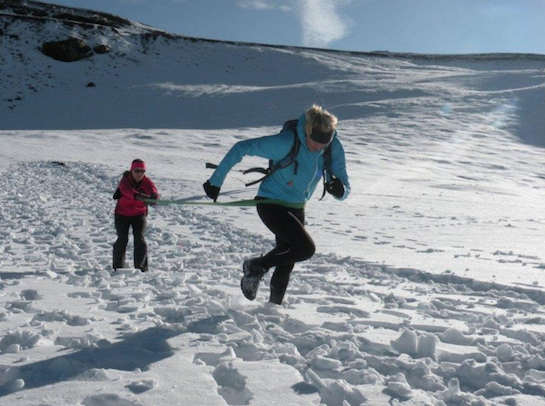 The most important factor of high elevation ski training is heart rate. You must live by your heart rate monitor. It is exceedingly difficult to ski “easy” at that high of elevation. Do not leave level 1 during an easy work out, even if that means walking up the hills. It is very easy to overexert yourself and eventually overtrain at higher altitudes.

I would also capitalize on any time you may have at sea level (if you are able to ski at lower elevation). Make sure that you take that time to work on max speed and sprint skills. If you are looking for some snap, any time at a lower elevation would be a great time to focus on that kind of training.

Make sure you stay hydrated as well. Skiing at that elevation can dry you out significantly faster than at MN elevation.

It sounds like you live in a beautiful part of the country! I don’t want you to get down about training at elevation. I think you can see great results as long as you are very purposeful in your training. Wear your heart rate monitor at all times and stay hydrated!

PS: You may also want to read one of our earlier blog posts:

Q: Recognizing that individuals will certainly vary, could you advise how you determine if you are at about right weight or correct % body fat for racing? Could you also comment on how age and altitude may play into finding your best race weight?

A: Race weight is a tricky issue that, as you mentioned, may vary greatly from one individual to another. I put much more emphasis into energy levels and response to training than race weight. If you are responding well to training and are feeling good, then I would venture to guess that your weight is just fine. If you were feeling weak and not feeling recovered between workouts, that may be an indication of being too light. Again, we tend to stick with the “if it ain’t broke” principle when it comes to weight.

As far as altitude’s effects on weight? Simply living at a low oxygen environment forces your body to up regulate it’s basic aerobic functions. Your body is burning considerably more calories than I am sitting here in Madison WI.